The boys of Huaxia dream of pairing up with girls to pilot Chrysalises, giant transforming robots that can battle the mecha aliens that lurk beyond the Great Wall. It doesn’t matter that the girls often die from the mental strain.

When 18-year-old Zetian offers herself up as a concubine-pilot, it’s to assassinate the ace male pilot responsible for her sister’s death. But she gets her vengeance in a way nobody expected—she kills him through the psychic link between pilots and emerges from the cockpit unscathed. She is labeled an Iron Widow, a much-feared and much-silenced kind of female pilot who can sacrifice boys to power up Chrysalises instead.

To tame her unnerving yet invaluable mental strength, she is paired up with Li Shimin, the strongest and most controversial male pilot in Huaxia​. But now that Zetian has had a taste of power, she will not cower so easily. She will miss no opportunity to leverage their combined might and infamy to survive attempt after attempt on her life, until she can figure out exactly why the pilot system works in its misogynist way—and stop more girls from being sacrificed.

Many thanks to the wonderful Caffeine Book Tours for selecting me for this tour! Thank you to them and to the publisher for the arc.

You can find the tour schedule here.

I have long loved and been fascinated by Wǔ Zétiān. Her ascent to power despite the patriarchal society in which she lived and her rule are stunning to fathom. From the moment I heard about Iron Widow I was so excited to get my hands on the book. This reimagining sounded so true to the spirit of that ascent whilst also taking it in inventive, even ingenius, directions. And this book absolutely did not disappoint any of my absurdly high hopes. From the moment that it was explained how qi powered the Chrysalises I was hooked. And details like Yang Jian and Dugu Qiueluo, the provinces being named for dynasties and the battle being broadcast across Huaxia – a historical name for China – filled me with absolute glee. As a history lover, this book is amazing. And if that at all interests you, I’d really recommend keeping note of names.

It’s been a long time since I’m really thought of China as home but it made me a little homesick for it.

Huaxia is as stunning and fantastic a world as it is cruel and unjust. The sheer spectacle of these giant Chrysalises is beyond words and their transformations a delight. The qi being channeled through the pilots giving their eyes a glow, lighting them up from within. Each battle is thrilling – both with regards to the Chrysalises against the Hundun and to the state of the pilots within. There’s glamour to it. You can see so clearly why the pilots are idolised and adored. But just as much as that’s true, I love that there are constant references to the reality of the world with descriptions like ‘a night wind keens across the Hundun wilds like a dead concubine crying out from beyond.’

This world is amazing and fantastic and it’s so easy to be swept up by the action and the world but this keeps it grounded in the horrors. And in this vein, I also like that it never shies from the torture and agony of Zetian’s disability and Shimin’s addiction and recovery. She’s always leaning on something or being carried if needed and the pain is likewise a constant thrum in the background – Chrysalis piloting excepted, of course. But even then there’s the relief of its absence. I don’t read many books where foot binding takes place but I’m glad that it wasn’t overlooked and downplayed, with Zetian even frustrated by the world stripping her of her ability to do things for herself. Even though it’s not intentionally infantalising. Even though she cares for those doing it to her.

Iron Widow would be a fantastic read and a great time even if it were just the story of a fantastic anti-hero and her ascent. However, it’s more than that. It doesn’t hesitate to delve into deeper topics – the corruption of the military, the weaponisation of its people, the power of the media. When we finally see it, the city is likened to the ‘performed silk shoes that girls wear on their bound, festering feet‘. This is a deeply unjust world and Xiran Jay Zhao doesn’t allow complicity to go unchallenged – not from Gao Qiu and his empire, from the pilots, from to the strategists and sages. Not even from Zetian herself – ‘such is the price we’re paying for survival: allowing this terrible system to use us as bait‘.

And quick side note: not only do we get a perfect encapsulation of the power of media, and most importantly, Gao Enterprises, but we get a name drop that had me howling with glee. Both for the sheer delight of it, and also because it gives texture to the history and present of the world.

Which is not to say it’s a heavy read! I, personally, didn’t find that to be so. There were certainly moments but not overall. There were quips like – “You can’t shoot me; I’m from Central Command!” “You can’t shoot me; I’m rich!” – that I found really funny. I hadn’t expected Sima Yi to be so amusing a character. And that’s not the only instance I’ve been surprised by the characters in Iron Widow. I mentioned above that I was delighted recognising Dugu Qieluo. As she’s Rongdi, a ‘barbarian’, as well as a woman, there are several opinions and view points given about her. From the very first to the very end, Qieluo is always changing in your estimation. And I bring her up because she’s the most obvious and spoiler free character to make this point about. It applies to just about everyone. This book and these characters are so rich with detail and depth.

I was curious how the polyamory would turn out in part because of the focus on Zetian. I’m still not that familiar with the romance genre but usually there’s perspective from both parties. I knew going in that Shimin and Yizhi wouldn’t have as much development there because we don’t have access to their point of views, and also, while there’s nothing wrong with relating more to one partner than another in one aspect – say, piloting a Chrysalis – it’s another way they don’t relate. I liked their progression. It felt natural, and in the end, with Yizhi taking a job working with them, there was also a place in the partnership for him. They were very sweet together. The three of them make for a lovely couple. They’re so supportive and grounding.

But most of all, I love Zetian. I have always loved angry characters, those who rage against unfairness, if not outright injustice. Her rage is justified and you want her to succeed. She’s even admirable for her fight. But anger, no matter how righteous, can obfuscate the nuances of a situation. Even if its evil of the highest order those nuances absolutely still matter but it’s completely understandable how Zetian can lose sight of that. It’s understandable wanting to dismiss them because they don’t justify the evil. But they matter still. I love that she grows. I love when it does matter to her, and I love when she decides that it doesn’t.

Wu Zetian, you are stunning. And this is one of my favourite books of the year.

“It’s true that there are some irredeemable people out there whose hearts are carved from something different than the rest of us, but most of us are the way we are because of something beyond our control. Even those who hurt others on a regular basis or have killed.”

Told you the triangle is the strongest shape, Strategist Sima, I want to say, knowing he would hear through the camera drones flitting around us.

Everyone lives in a different world. So much of the time, people make decisions they don’t want to. It takes more than just get out or just stop drinking.

True power is when I stood on the Nine-Tailed Fox with Yang Guang’s corpse at my feet, playing by my own rules. Victorious by my own standards. Reliant on no one but myself.

Strip away our mortal flesh and pulverize our bones, and whatever still exists for the both of us, exists with the same ferocity.

Rage chars through me as my mind ascends into the Vermilion Bird. Burning, roaring rage

Frustration coils inside me. I know they don’t do things like this out of some malicious intent to get something out of me or to bind me more tightly to them, so I don’t resist or say anything, but I hate that the world keeps stripping me of my ability to do things for myself.

This isn’t his victory. This is my temporary mercy. 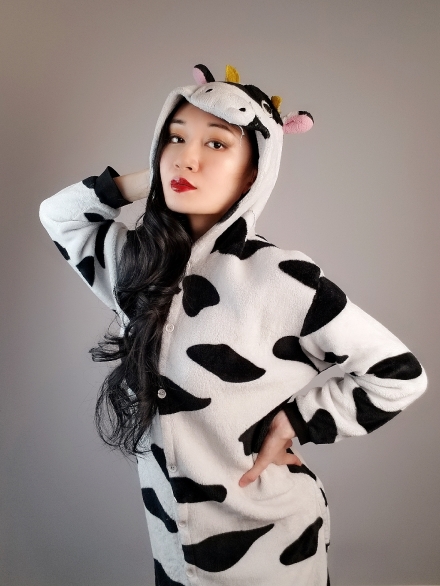 Xiran Jay Zhao is a first-gen immigrant from small-town China who was raised by the Internet​. A recent graduate of Vancouver’s Simon Fraser University, they wrote science fiction and fantasy while they probably should have been studying more about biochemical pathways. You can find them on Twitter for memes, Instagram for cosplays and fancy outfits, and YouTube for long videos about Chinese history and culture. Iron Widow is their first novel.